The term "frozen shoulder" is used to describe a variety of conditions that cause pain and limit the range of motion of the shoulder joint. Most commonly caused by inflammation of synovial tissue or thickening of synovial fluid, frozen

shoulder occurs mainly in middle-aged people who have a history of shoulder injuries. In some cases, the pain associated with frozen shoulder can be severe enough to disturb a person's sleep; in others, patients cannot rotate the shoulder properly and have difficulty moving the affected arm out and away from the body. Once a person is diagnosed with frozen shoulder, the initial stages of care are aimed at reducing inflammation and increasing range of motion. Toward that end, various treatment methods have been devised, including anti-inflammatory drugs, ultrasound, heat, massage, and stretching and isometric exercises. Steroid injections and nerve blocks have also been employed at times, but the effectiveness of these therapies can vary greatly from patient to patient.

Several studies have reported that acupuncture can successfully treat frozen shoulder, but the majority of these studies have not been of the randomized, controlled trial (RCT) variety. A new study using the RCT format compared the use of acupuncture (along with exercise) to exercise alone in a small group of frozen shoulder patients. The study, published in the Hong Kong Medical Journal, found that patients treated with acupuncture and exercise demonstrated "significantly greater improvement" on shoulder assessment tests than those using just exercise, and suggests that acupuncture could be useful in cases where more conventional therapies have been unsuccessful.

Thirty-five adults diagnosed with frozen shoulder were randomly allocated to an exercise group or an exercise plus acupuncture group and treated for six weeks. Exercise patients participated in a standard group program of gentle stretching exercises under the supervision of a licensed physiotherapist. Treatment sessions lasted 30 minutes and were given twice a week for six weeks. In addition, patients were told to perform a series of shoulder exercises 10 times each morning, mid-day and evening at home during the trial period.

The exercise/acupuncture group followed the same home and group exercise programs as the exercise group, but also received acupuncture twice a week during the trial. A three-inch, 30-gauge needle was inserted perpendicular to zhongping, an extra acupuncture point located on the lower leg along the stomach meridian. Zhongping was chosen based on the belief that stimulating it can "improve the flow of qi across the shoulder." See chart below to see the location of the zhongping extra point on the lower leg: 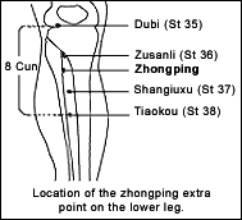 A contralateral needling technique was used, in which the right-side acupoint was used for left frozen shoulder and vice-versa. The needle was inserted to a depth of 2.5 inches, followed by wide-amplitude needle rotation simultaneously with lifting and thrusting to produce de qi. The needle was retained for 20 minutes, with three one-minute needle manipulations made during the treatment period. While being needled, the patient also performed a series of functional exercises using the affected shoulder.

Subjects in both groups were assessed using a test called the Constant Shoulder Assessment, which combines patient ratings for pain and activities of daily living with range of motion measurements for a maximum score of 100 points. Assessments were taken at three intervals: baseline (just prior to the start of the study); at the completion of treatment; and at 20 weeks.

CSA scores were relatively equal for both groups at the beginning of the study. Within six weeks, however "significantly higher" scores were reported in patients receiving acupuncture and exercise, with an average improvement rate nearly twice that of the exercise-only group. These improvements were also seen at the 20-week follow-up test (see Table 1).

Despite the relatively deep needling involved in the trial, the researchers reported that no acupuncture-related complications occurred during the course of care. However, one patient in the acupuncture/exercise group discontinued treatment after the second session due to fear of needle pain.
Some limitations were noted by the investigators -- for instance, the number of exercise minutes between groups. The exercise-only group performed supervised shoulder exercises for a total of 360 minutes over the treatment period, whereas the acupuncture/exercise group performed supervised exercises for 600 minutes (360 in a group setting, 240 while being treated with acupuncture). Because acupuncture is known to relieve pain, the researchers speculated that patients who had acupuncture before exercise may have shown greater improvements because they experienced less pain during exercise. Similar concerns were raised about the size discrepancies between groups (the acupuncture/exercise group had 13 patients, while the exercise-only group had 22) and the lack of a control group to disprove the placebo effect.

Visit our blog and find healthy recipes for breakfast, lunch, dinner, snacks and more! We also offer current news to help keep you and your loved ones healthy, happy and safe. Come Check It Out!